Our Ormond Beach Location Is a Historic Landmark 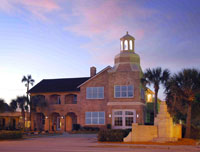 The Fire House was built for the Town of Ormondi as a fire and police station with a jail. It was approved by the federal government as a WPAii project on November 27, 1935 with an appropriation of $12,467. The total cost was projected at $22,000 and as was customary Ormond paid the cost above the federal appropriation. It was the only WPA built building in Ormond. Construction started on July 18, 1936 and the Fire House was placed in service on October 14, 1937. The mayor was Hubert A. Priceiii, the police/fire chiefiv was D.W. Whitehurst and the population of Ormond was less than 2,000.

52 local workers, who had just completed the WPA Granada Avenuev street improvement project, at least some of whom were African American, built the Fire House. It was constructed of brick and native coquina rock, a common building material in the area at the time. On the first floor there were two bays, a storage area, an office for the chief, and a "sturdy" two cell jail (one for each gender). Living quarters for the chief were above the jail and for the firemen were above the bays, separate but accessed by a single interior staircase. An exterior staircase along the west side of the building from the firemen's quarters likely provided the route to the fire truck. The furnace was in a partial basement there was a full attic. At the time it was built the Fire House was considered a model facility for communities the size of Ormond.

Although the Fire House was built for two fire trucks Ormond only had one, its first, a 1930ish Reovi. Not long before Ormond relied on volunteers and a hand drawn hose cart for fire protection. It was not until 1949 that Ormond acquired a second truck, a 1948 Mack. 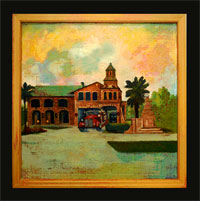 The architect for the Fire House was Alan J. MacDonough. He was also the architect for at least two other coquina rock WPA projects -- the Bandshell and Clock Tower in Daytona Beach and Holly Hill City Hall. The Streamline Hotelvii, Jackie Robinson Ballparkviii and Peabody Auditoriumix were his as well. MacDonough is the architect of record for numerous structures listed on the National Register of Historic Places. The architectural style of the building is Spanish Colonial Revival, incorporating both Mission and Spanish Revival elements. Prominent architectural features, aside from the coquina, include arched covered porches on the first and second floors; a cross-gabled roof; keystones above all doors, windows and arches; and an octagonal tower with pyramidal low pitched roof. There is a monument in front by Granada Boulevard that has an octagonal central feature.

The Fire House was also a polling station, hurricane shelter and police courtroom. During World War II it served as a Civil Defense observation post and Raid Casualty Station. Of course it was the site of many a school field trip and Junior Police and Firemen's Club meeting. From 1947 to 1971 a municipal water tower was right behind the jail. From 1977 until 1995, except one year it was closed, the Birthplace of Speed Museumx, occupied part of the premises.

At least a couple of famous people had dealings with the Fire House. In 1938 famous artist Fred Dana Marshxi donated his personally designed and specially built Franklin Roadster to the Fire Department. In 1961 rock-n-roller Bobby Lee, known for the song "Sugar Love" was arrested, jailed and escaped. Lee reportedly wrote a song about the jail and the constable who put him there.

The Fire House remains today much as it was when built. The exterior is almost identical, even with original light fixtures at the first floor porch. The original interior walls are largely intact, including the thick jail cell walls. Many original features are visible, such as exposed brick and coquina walls, keystones, the high ceiling and concrete floor in the large bay and the jail cell door frame and sill. The fire pole in use in later years hangs horizontally as part of a lighting fixture in the large bay and the original furnace is in the basement.

There was a fire station at the Fire House continuously until November 2006 when Station 91 moved to a new home nearby on A1A, a span of nearly 70 years. It has been extensively renovated in a manner sensitive to its history by new private owners and is currently used as offices for the business law firm Snell Legal. It was designated an Ormond Beach Historic Landmark in 1987 and added to the National Register of Historic Places in 2010. For a YouTube video of photos of the Fire House see the "Our Historic Building" page of the Snell Legal website, www.snelllegal.com